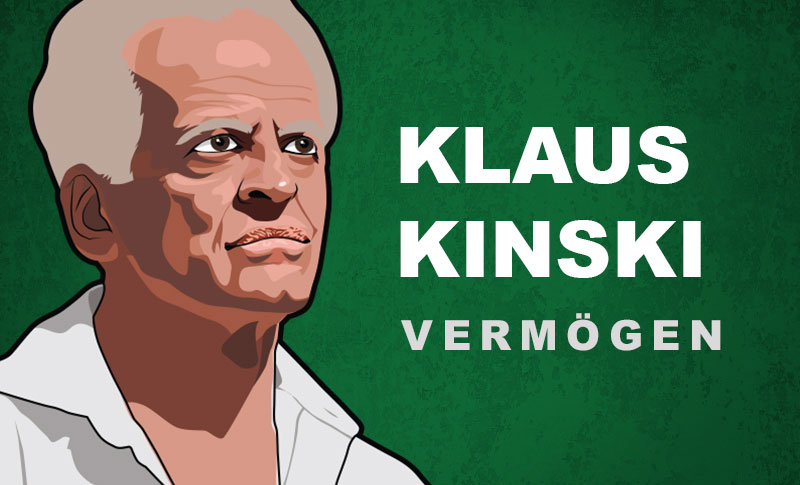 In retrospect, it is difficult to determine how large Klaus Kinski’s Net Worth was during his lifetime. What is certain is that Kinski enjoyed international fame as an actor and led a life of luxury.

In his films, Kinski usually played the role of the driven, psychopathic villain, which he fulfilled in an inimitable way. In public, too, Kinski presented himself as the enfant terrible of bourgeois society.

If you look at Kinski’s private life, it becomes clear that it was about more than self-promotion. Outbreaks of violence, drugs and excess sex run like a red thread through Kinski’s biography.

There is hardly an actor whose life is the subject of more rumors than Klaus Kinski. One reason for this is Kinski’s statements, which often contradict those of his companions.

What is certain is that Kinski grew up as the son of a pharmacist in Berlin. The claim that he grew up in very poor circumstances contradicts the statements made by his older brothers.

There is also some ambiguity about Kinski’s time in the Wehrmacht. It has been proven that he was taken prisoner by the British in 1944 as part of a paratrooper unit on the western front. However, Kinski’s claim that he deserted and was sentenced to death for desertion can be doubted.

Clarity prevails again with a view to his first experiences as an actor, which he made in the prisoner of war camp in England. There he performed on the makeshift mezzanine.

After his return to Germany, Kinski managed to become part of the ensemble of the Berlin Schlosspark Theater despite the lack of acting training. However, he was soon released due to an outburst of anger.

In 1947 Kinski was in front of the camera for the first time for the film “Morituri”. The story of concentration camp inmates fleeing the Germans earned him threatening letters so soon after the war.

In the early 1950s, Kinski received psychiatric treatment for the first time after molesting and physically attacking an acquaintance. A psychosis was diagnosed, which later on in his life was to manifest itself in repeated episodes and suicide attempts.

After the short break, Kinski toured Germany and Austria with a solo stage program. He recited the texts of well-known writers in an inimitably expressive way.

This was followed by appearances in the famous Edgar Wallace films, which made him known to a wide public. He first attracted international attention in “Doctor Zhivago” (1965).

He first played the villains in a series of spaghetti westerns in the late ’60s. In the early 1970s, Kinski first worked with the famous German director Werner Herzog, with whom he made five of his most successful films, including “Aguirre, der Zorn Gottes” (1972) and “Fitzcarraldo” (1982).

The films with Werner Herzog make it clear that towards the end of his career Kinski developed increasingly high artistic standards. In his last film “Kinski Paganini” (1989), Kinski also dealt with high culture. The story of the legendary Italian violinist Paganini inspired him not only to play the lead role, but also to write and direct the screenplay.

The highlight of Kinski’s career was the film Aguirre, or the Wrath of God. (1972) Apart from the fact that “Aguirre” is still called one of the best hundred films of all time by film critics, this role allowed Kinski to emancipate himself from the Edgar Wallace films and the spaghetti westerns, which despite their popularity tended to be were simply knitted.

“I realized a long time ago that I can’t choose the films, especially since I always need money. Nor is it worth picking them out. One is like the other, and all together are not worth it. What else can I do but make the best of this garbage.”

“Yes, I have violence inside me, but not negative ones. […] My violence is the violence of the free who refuses to submit.”

“It’s hard for me to imagine how the worms are going to eat me. I never think about death. I haven’t even started to live properly.”

In his first appearances on the improvised stage in the prisoner of war camp in Essex, Kinski mainly played female roles

In 1971, Kinski planned to tour Germany as “Jesus Christ the Redeemer.” Significantly, the tour was canceled after the scandalous first performance

In 1980, Kinski turned down Steven Spielberg’s later blockbuster Raiders of the Lost Ark, saying the screenplay was a “boring, idiotic piece of crap.”