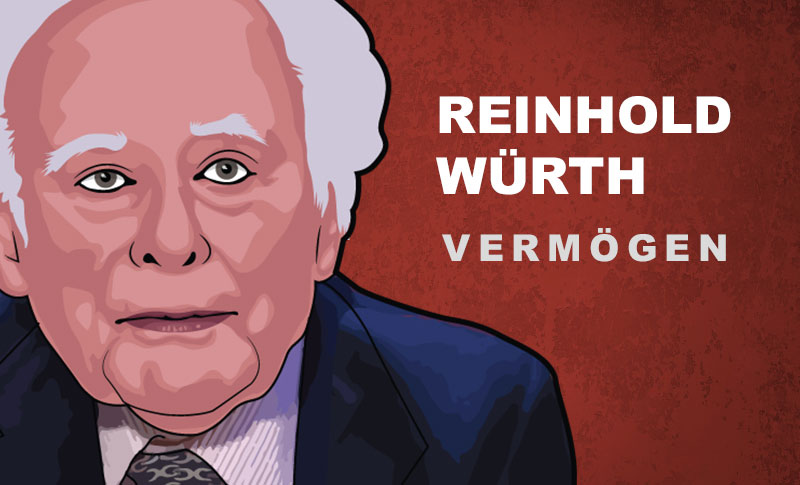 The entrepreneur Reinhold Würth initially built up his huge Net Worth with a screw trading company. After intensive expansion, he became the international market leader for assembly technology. He is also an art patron and lover and is an honorary professor of entrepreneurship.

Born in Baden-Württemberg in 1935, his parents founded a screw wholesale business immediately after the war. Initially without employees, Reinhold Würth left school at the age of 14 and became the first trainee and employee in his parents’ company. This was based in Künzelsau. His father died before he came of age, so Reinhold Würth had to wait two years until he turned 21 before he could take over the management of the company. From then on he led the “Würth” company from a regional player to a global company.

Reinhold Würth succeeded in doing this by expanding more and more and expanding the range of his company “Würth”. This included quite early on simply buying up the producers of screws as soon as the flourishing company gave him the means to do so.

When he finally started to expand his trade abroad, the way to a global company was started. The Würth Group is now active in over 80 countries with over 400 different companies. It achieves annual sales of over 10 billion euros, more than half of which is generated abroad. Initially only selling screws, the Würth Group’s field of activity is now very broad, but the focus is still on fastening technology.

Reinhold Würth has not been part of the operational management since 1994. From 1999 to 2003 he was head of the Institute for Entrepreneurship at the University of Karlsruhe.

If the assessment of his wealth is correct, a few years ago he was the eleventh richest German and the one hundred and thirty richest person in the world. He has now contributed his assets to the Würth Foundation. The company should continue to do so after his death in his spirit.

Since retiring from operational management, he has appeared in public primarily as a patron of the arts. On the one hand, he owns an extensive collection called the Würth Collection. On the other hand, it promotes the arts in general and the opportunities for ordinary people to get in touch with them.

In 2003, for example, he bought the Princely Fürstenberg Collection when it was threatened with liquidation. In 2011 he paid 50 million euros for the painting “Darmstadt Madonna” from the early Renaissance. Like many other parts of the Würth Collection, this is on display in the Johanniterkirche in Schwäbisch Hall.

Reinhold Würth has been married to his wife Carmen since 1956. With her he has three children. He has lived with his wife in Hermersberg Castle since 1974. His disabled son was kidnapped in 2015 and later released unharmed. The kidnapper(s) have not yet been caught.

Reinhold Würth belongs to the New Apostolic Church. In 2008 he faced allegations of tax evasion. However, it was about internal clearing procedures within his company, not about his private income. Würth agreed to a penalty order of 700 daily rates, with which he is considered a criminal record. This is one of the reasons why he applied for Austrian citizenship in 2010, which he received.

Among the many awards that Reinhold Würth has received, it is possible that the Federal Cross of Merit, awarded in 1985, is one of his highlights. Or it is the extension of the one from 1996, when he received the Federal Cross of Merit, 1st Class. There are also numerous honorary doctorates and honorary citizenships, including from the University of Palermo and the University of Louisville. Reinhold Würth is also a Knight of the Legion of Honour.

In general, however, it should be the fact that the parental small business has turned into a billion-dollar global company.

“Every company is a sociological structure and – like the living organism – is subject to becoming, being and passing away. I conclude from this: as long as a company is still developing, we cannot perish. That’s why growth is so important. Standing still is a step backwards and the first step to the grave. But nobody is buried alive – and because our 75-year-old company is so fresh, vital and full of spirit, it will have a prosperous future ahead of it.”

“The company is my hobby, my electric train.”

Reinhold Würth clearly and publicly warns against a shift to the right in society in the Federal Republic of Germany. In particular, he named large parts of the AfD as a danger to society.

He is convinced that art can convince his employees. He was the first company in the world to build an art gallery into an administration building of his company.

The annual World Cup tournament in Tauberbischofsheim in women’s epee fencing has been named after him since 1987.